In 2017, we began working with the University of Missouri-Kansas City (UMKC) to increase the number of applications to their School of Nursing & Health Studies. Last year, we expanded our work with them to include a campaign to drive enrollments in their business school’s program, Bloch Launchpad. Our Facebook and Google online advertising efforts have paid off big time, as this case study will show.

UMKC wanted to increase the number of applications for their online nursing programs. To kick off our paid search advertising campaigns with them, we first worked with our client to develop new landing pages that were created specifically for these campaigns and optimized for conversions.

Throughout our time working with UMKC we have continued to test, analyze and adapt our efforts, resulting in more and more leads.

Our campaigns for UMKC have extremely high traffic, and due to our targeting and optimizations, the number of applications to UMKC’s nursing programs has increased while the cost-per-conversion has gone down. For our Facebook Ads campaigns, the number of landing page views has gone up by 164% from the previous period while the cost per landing page view has decreased by -50%. 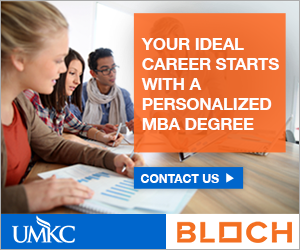 Building off of these successes, we recently launched a new campaign for UMKC’s business school, the Bloch School of Management. They are introducing a new program called Bloch Launchpad, which provides scholarships for incoming freshman and transferring students.

Our Google Advertising focused on brand and competitor keywords, which brought in 68% of application submissions. This confirmed that students already familiar with UMKC and its competitors would be more likely to be interested in UMKC’s Undergraduate Scholarship Business Program.

We also created Google display ad campaigns to target potential students who were not already aware of UMKC. These awareness campaigns were successful in bringing in new applicants without having to retarget them, and we found that high school students were particularly engaged during this phase of the marketing funnel. We also noticed that a majority of website visitors for these campaigns came via mobile devices, which confirmed that the application process was mobile friendly and that students are using their mobile devices to search for university scholarships.

Our awareness campaigns on Facebook were also successful in spreading knowledge of UMKC’s new program. We created a video advertising campaign on Facebook Ads that was seen by nearly 120,000 people. The fact that, on average, viewers watched at least 76% of the video means that they were strongly informed about the scholarship program after seeing our ads.

How can online advertising help you capture more leads?

Our team of online marketing experts can help your company or organization reach a larger audience and convert more visitors into paying customers. Learn more about our online advertising services or contact us today.