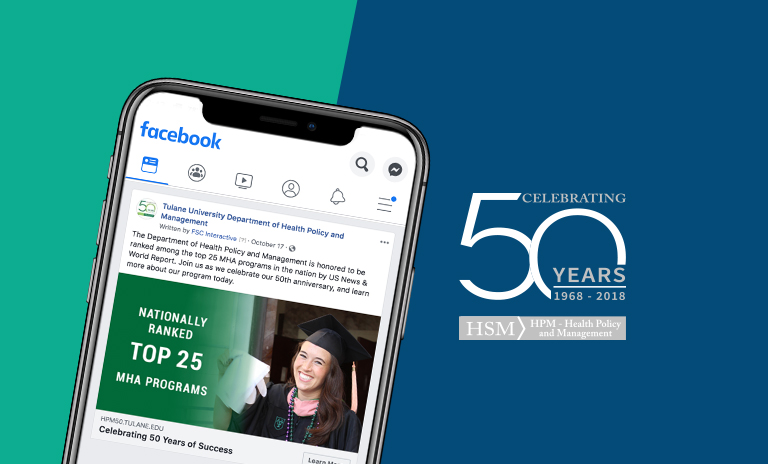 Tulane University’s Department of Health Policy and Management came to FSC Interactive in need of a digital marketing campaign to boost awareness of their program among their peers and colleagues. They wanted to promote the upcoming 50th anniversary of the school in 2019 as well as inform the public about the department’s recent name change.

It was also imperative that they keep or enhance their program ranking in the US News and World Report. Their primary goal for our digital marketing campaign was to generate buzz among alumni, current students and peers around the national rankings, as well as promote the school’s recent accomplishments such as their new dean.

The Digital Marketing Campaign We Created

FSC’s 50th Anniversary campaign was designed to build awareness and engagement, as well as drive traffic to the 50th anniversary landing page via social media management and online advertising placements.

We utilized Facebook and LinkedIn, optimizing our brand awareness ad campaigns for reach and video views, while another set of ads was designed to drive traffic and link clicks to Tulane’s landing page. Video viewers were retargeted with a traffic ad leading users to information about the 50th anniversary. 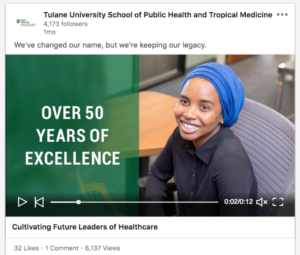 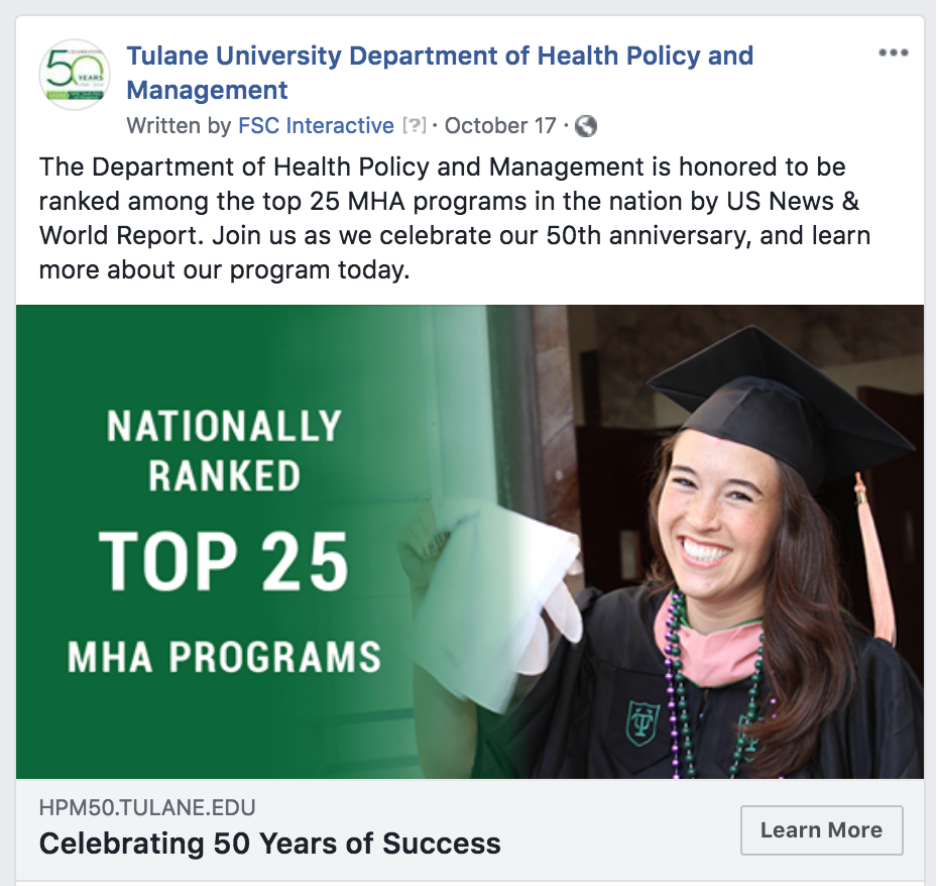 FSC also aimed to encourage voters to chose Tulane as the top program in the country via hyper targeted email marketing in the months of November & December 2018. We sent four emails over the course of two months to a database of US World News & Report voters to drive home the accolades and successes, creating a funnel-based message to all audiences. We A/B tested the first two sends to determine the optimal send time for their audience.

FSC adopted a funnel-based approach to advertising Tulane’s Health Policy & Management Program. We spread a wide net at the top of the funnel, utilizing brand awareness ads served to the voting community and Tulane supporters that were unfamiliar with the name change of the Department or its 50th Anniversary.

Next, we served consideration ads to the same audience, who was now familiar with the name change and the department’s historic tenure. We increased the budget of the traffic campaign in the second month after the brand awareness phase had time to take effect on the audience.

Lastly, we garnered extra engagement via boosting organic social media content to those that engaged with the message. For example, we noticed that the posts highlighting faculty performed best overall on the department’s Facebook page, proving that the audience there is heavily invested in the department’s staff.

As for our email marketing campaign, the average open rate for our emails was consistently above the industry standard, indicating that the email list was interested in the learning more about Tulane’s Health Policy & Management Program.

The biggest win of all was when we recently learned that through our targeted email marketing and paid social advertising campaign, we helped improve their US News and World Report ranking by 5 spots!

How can FSC Interactive help you reach your digital marketing goals?

The strategic funnel approach we used in this campaign ensured that we hit Tulane’s audience at the right time for them to take the action we desired.

We create innovative digital marketing strategies that prioritize your sales goals while cultivating an ideal, engaged audience for your brand. And we continually optimize to ensure that your business keeps seeing results on both fronts.

Want to learn more about how FSC can help your business reach its digital marketing goals? Contact us today.