You know you’re in good company when your agency’s name is listed among titans like Conde Nast, The Atlantic, Tech Insider, Vox Media, The Washington Post and more. You know when actors say that being nominated is simply enough? Well, you might not always believe them, but believe us when we say we are so thrilled to be nominated for a Digiday Publishing Award, a distinction shared by some of the best and brightest names in the industry.

Take a look at our press release outlining the details of our nomination for the Digiday Publishing Awards in the “Best Publishing Site Design” category, recognizing our efforts for the new (and vastly improved) GoNOLA.com. Nothing is accomplished alone, and our position as a finalist is no exception — we wouldn’t be here without the help of our brilliant partner agencies Southleft and 360i, who were instrumental in the development of the GoNOLA website and whose names will appear with ours on the trophy if we win. Keep your fingers crossed! The awards ceremony is on March 24 at The Cutting Room in New York City. 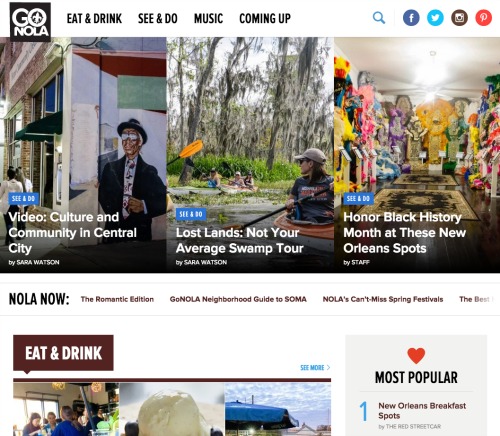 Check out our press release here, or read it below.

The award honors the efforts, combined with partners 360i and Southleft, to revamp GoNola.com, an extension of the New Orleans Tourism Marketing Corporation, which serves as a culture guide providing an inside look at some of the city’s most enticing – yet off-the-beaten-path – experiences to encourage visitation. The redesigned GoNOLA.com launched on June 3, 2015. Featuring a sleek interface to support larger visuals and a seamless search platform, the site enables readers to explore the city of New Orleans (virtually) with better navigation and user experience, including responsive design ideal for mobile search.

In addition to offering a clean and focused navigation experience across all devices and formats, the existing GoNOLA content was optimized for SEO, particularly across high-competition keywords like “Things to do in New Orleans.” Within the first month, sessions increased by 574%, users increased by 518%, and page views increased by 561% compared to the same period the previous year.

Winners will be announced during a Digiday Publishing Awards ceremony on March 24 at The Cutting Room in New York City from 6:30-9:30 p.m.

About FSC Interactive
For innovative and sophisticated clients looking to make data-driven decisions to find, attract, convert and retain their customers, FSC Interactive is the strategic member of a business’ marketing team, delivering goal-based results through interactive digital strategy. With a track record of creating cutting-edge, award-winning work since 2007, FSC’s results-driven approach uses metrics to complement creativity: a powerful balance to reach business goals with innovative and effective efforts.