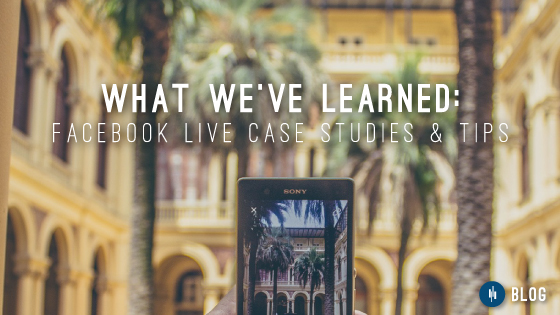 When Facebook Live became available to all accounts earlier this year, we immediately recognized the opportunities this offered our clients.

Throughout 2016, we’ve utilized Facebook Live with great success for multiple clients and we’ve learned a few things along the way. The following Facebook Live case studies show how this tool can be used to boost your bottom line, plus we’re sharing a few tips from our live-streaming experiences.

Our first major Facebook Live initiative was during French Quarter Festival. Our goal was to support New Orleans Tourism Marketing Corporation’s sponsorship of the festival and aid in generating additional excitement and interest in the event. NOTMC conducted a social media activation from April 7 – 10, 2016 utilizing Facebook Live and an on-site display of user-generated social media photos.

As a part of this activation, FSC Interactive produced four Facebook Live videos showcasing a wide variety of what French Quarter Fest has to offer: music, food and unique events. Lauren Thom, “Fleurty Girl,” provided on-air commentary and insights on topics such as the festival’s history, activities, artists, vendors and plentiful food options. 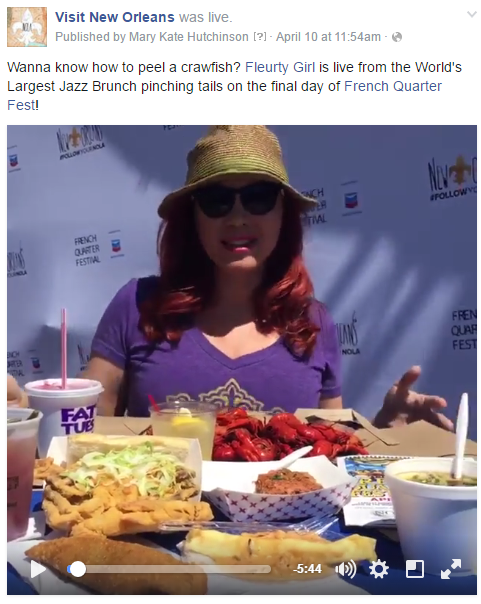 Our live-streaming event coverage included a different aspect of the event daily: on Thursday we headed to the balcony of Muriel’s Restaurant at Jackson Square to share a bird’s eye view of the opening second line parade. Friday’s livestream featured Irma Thomas performing at the Abita Stage and on Saturday we shared Amy Nicole and the Zydeco Soul playing the Cajun Zydeco Stage. To close out the event, on Sunday we offered viewers around the world a glimpse of the world’s largest brunch fest and showed them how to peel a crawfish.

The results? Four days of Facebook Live coverage resulted in more than 121,700 video views, with more than 15,300 people tuning in live. In total, more than 115,000 unique viewers saw our broadcasts, watching over 55,700 minutes of footage. These videos reached more than 392,000 people and received more than 592,000 impressions.

More recently, we’ve been using Facebook Live to share some special moments with the fans of Hotel Monteleone. 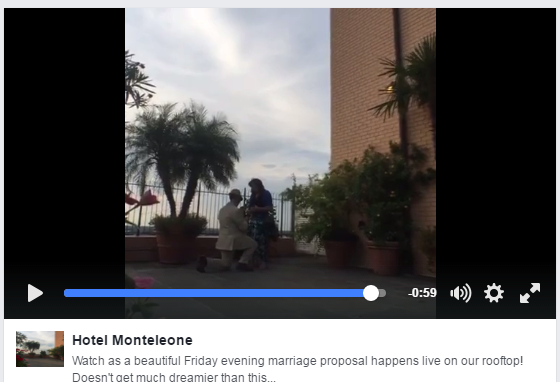 This summer a fan reached out to us via Hotel Monteleone’s Instagram account to inquire about arranging a surprise proposal to his girlfriend on the roof of the hotel. He wanted to bring in a photographer to document the experience, and we saw this as a great opportunity to use Facebook Live to capture and share this moment. The video reached 36,400 people and received 2,300 post clicks and 3,300 likes, comments and shares. 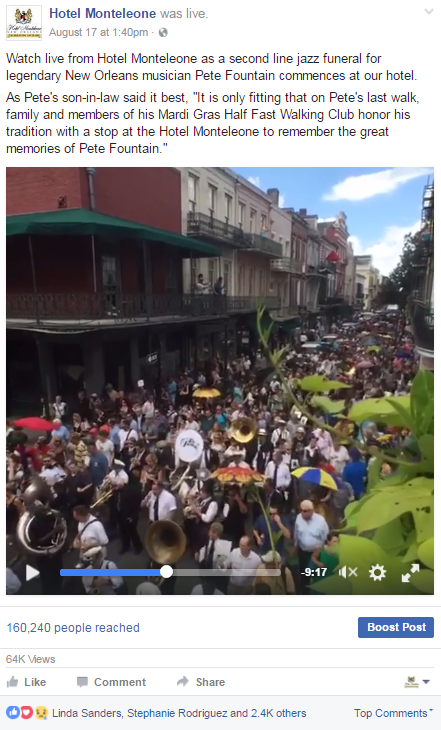 Our second Facebook Live broadcast for Hotel Monteleone took place the following week, featuring the jazz funeral second line for legendary New Orleans musician Pete Fountain, which commenced at the hotel. This broadcast reached 160,240 people and received over 64,000 views, with more than 2,800 likes and comments and 1,332 shares. Both of these live-stream videos were two of our highest performing posts to date for Hotel Monteleone.

As promised, here are a few crucial things we’ve learned about what it takes to create a successful Facebook Live broadcast:

1. Make sure you have a strong Wi-Fi connection – sometimes the live stream will work for LTE, but it looks very blurry.

2. Have someone off-site to watch the live stream and answer any questions or comments people might have.

3. Use a tri-pod or some sort of stabilizer so the phone isn’t shaking.

4. Facebook Live takes A LOT of battery, make sure your phone is charged or bring a portable charger.

6. Make sure to choose an event with as few variables as possible. It’s stressful being live and not having full control of what gets aired!

7. Users can be impatient, so choose a Facebook Live topic that is worth watching all the way through!

For nearly a decade, FSC Interactive has set the pace for the digital marketing industry in the Greater New Orleans area. We work with clients in many different industries to create smart social media strategies that expand your influence and customers. Contact us today to learn how we can work with you!